Let’s be honest, I’ve been waiting for a moment like this one, where algorithms trump my quick visual assessment.

Here’s the situation on a relatively standard scale: can you spot anything? Don't cheat and look below.

21:00 Max starts climbing slowly. Because he had a small hypo earlier, the light evening meal, mostly protein (salmon) he took starts showing up.
21:30 recalibration, the Dexcom was a tad too high, the Libre (on the other arm) was spot on at 108 mg/dL. The decision is made to take no action because we know that the 20:30 will start pushing BG back down a bit roughly 3-4 hours after injection (20:15 in this case).
Sure enough, we seem to be on a small downtrend starting around 23:15, for a 155 mg/dL high. Yes, that is not ideal, but at some point we have to consider the trade-off between undisturbed sleep and perfect BG. Today, undisturbed sleep was the intent.
At first sight, this slope still looks like a mild downtrend, with a bit of noise.
However, this is what I get in another view: my compression detection algorithm has triggered!

Interesting… Time to look at the decision parameters

Parenthesis: my compression algorithm isn’t wildly different from what has been published in the literature. I developed it independently in 2015, as a toy project. In a nutshell, the algorithms examines the last few hours available (at least an hour although I can fine tune the parameters conveniently), assesses noise, overall trend and builds “confidence” on those values. It’s a bit of a cookbook of hacks and rules. For example, the SD a detrended trend gives a good indicator of the current “meta” noise level in the signal: a drop caused by a compression should, obviously, by more important than the SD of that detrended signal by some factor (one that I tuned based on experience and visual assessment). It also goes without saying that the delta must be negative. On top of that, a few rules have been added here and there for experimentally observed special cases.

At that 00:53, the new value enters the “hour buffer” which happens to have an extremely high level of confidence. Note that the algorithm did not have that level of confidence at 23:23, post peak, where the hourly trend was less clear and a bit of noise (maybe a transient compression) pushed the detrended SD a bit higher.

That being said, the case isn’t settled at this point and I decide to zoom on the chart and go up and check. Max is indeed leaning on his Dexcom, and not leaning on his Libre. The Dexcom, which had been tracking the Libre after recalibration is actually 10 points below.

The acid test is of course to move Max a bit from leaning on its Dexcom to not leaning on either devices. Here is a zoom on what happened: the very mild compression recovered almost immediately.

At this point, I can already hear the dissenters saying “How in the world can you tell it is a compression on such a small variation ? My Dex can be off by xx points or jump around”

Good question: let’s answer this methodically
… but when the Dexcom (or Libre) is tracking smoothly, there is very little variation in the signal, or detrended signal if in a clear trend. That is that consistency, when the signal is good, that allows Dexcom executives to claim their technology is already much better than BG Meters. That is a statement I can totally agree with… until real life interferes (micro traumas, compressions, failing sensor, encapsulation…) and, of course, except for the fact that the baseline Dexcom values depend to a large extent of the performance of your BG Meter.

Anyway, this blog post is almost live because this must be the first time an algorithm tells me something I may have not noticed. 3 years ago I had a quick look at Neural Networks and AI but, while I got them to tell me interesting things and issue decent predictions, they never told me anything I wouldn’t have noticed or predicted by myself. That one is a first!

Ah, and one more thing – let me reassure all the hydrophiles out there, no glass of water was harmed in this experiment.
Posted by PierreV at 5:56 PM No comments:

I am always surprised at the number of patients or caregivers who are either unfamiliar with or afraid of the “pre-bolus” technique. “Pre-bolusing” means injecting insulin 25, 20, 15, 10 minutes before a meal rich in carbohydrates. While I am sure this post will be very basic for most of the readers of this blog, I feel it could be useful for occasional readers.

What is the reason behind pre-bolusing?

It is very simple. Ideally, you want your insulin injection to match as closely as it is possible the insulin secretion of a non T1D person. Unfortunately, this is not possible with insulin that is injected subcutaneously. When you are not diabetic, a meal will trigger an immediate insulin secretion in the bloodstream (in some studies, the mere thought of a meal was enough to trigger an insulin secretion).  As a T1D, the insulin you inject (or push through your pump) lands in the peripheral subcutaneous tissue and needs to be picked up. That takes a while. This is not speculation, not something “one needs to consider” – it is a fact and it has been extensively studied.

In the graph below, you can see the three essential differences between a physiological response and an injection.  (source: recovered data from https://www.ncbi.nlm.nih.gov/pubmed/26041603) Note: these activity curves are always a bit approximate in terms of absolute activity as, even in healthy volunteers, clamp studies area bit imprecise. Model curves don’t take some practical parameters into accounts. What matters is the notion of delay (due to absorption and transport) of the injected insulin peak and, later, the residual tail which is often ignored.

After an injection, even if you have matched your insulin dose and meal perfectly

Here are a few real life examples, all of them are high carbs breakfasts. 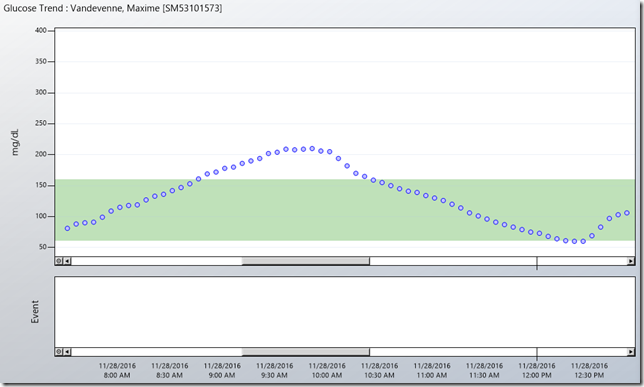 Late bolus: in this situation, the injection came during the meal (as in “f***, I forgot my insulin”). The relative lack of insulin leads to a higher peak, that is to be expected. But the late relative excess is also more pronounced. It leads even more quickly to a potentially severe hypo that requires a couple of corrections. 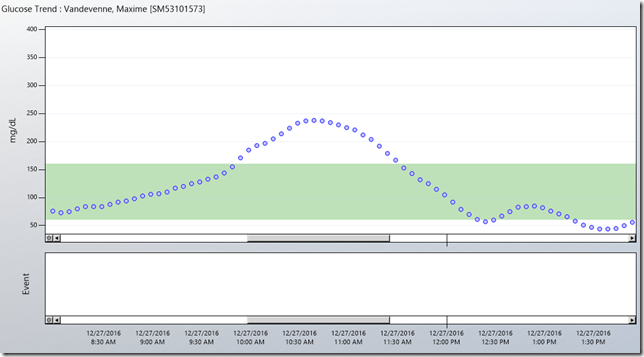 Pre bolus: here, the insulin was taken some 10 minutes before the meal. The difference is drastic. The initial peak is greatly reduced and the relative excess of insulin has a minor impact. Yes, the timing possibly could have been a bit better, maybe 15 minutes. And, yes, there is still what could be considered a mild hypo. But in this case, a couple of dextrose tablets was all we needed to get back on track. 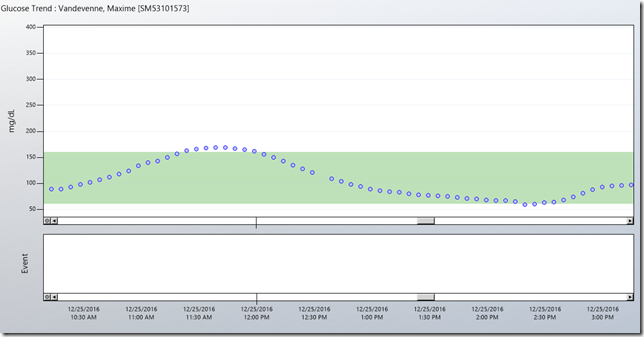 20 mins prebolus:  In this case, Max woke up a bit late (holidays…) with a dawn phenomenon already significant. This gave us the opportunity for a longer wait. It ended up so well that the insulin action tail (and another small prebolus) took care of the light 2PM lunch.

Important note: we typically don’t prebolus if we are trending down or already below 80 mg/dL. We obviously don’t want any additional insulin activity pre-meal in those cases. Common sense, as usual, applies.