I have already posted a few non diabetic CGM/FGM response patterns to food and exercise and even made my 2014 complete 14 days run available on this blog. In this very quick post, I will simply share the result of a full “strict zero carb” day on a non diabetic (your servant, now almost 54yo). A few BGM test strips were spent to ensure the CGM/FGM was working perfectly. The minimum of 62 mg/dL probably wasn't reached and came in what definitely looks like a prolonged compression.

I will stubbornly avoid discussing my opinions on that type of diet, short term or long term, in adults or kids. A comprehensive review of its issues and merits can be found here (pdf) on the paleomom blog
Posted by PierreV at 5:12 PM 2 comments:


The blog has slowed to a crawl, I apologize. The reasons behind my relative silence are

Let’s now have a look at the study, recently published in the British Medical Journal, “An alternative sensor-based method for glucose monitoring in children and young people with diabetes.” which you can download here.

The work was sponsored by Abbott: they were involved in the planning, the funding and the provision of devices used in the study. Except from the possible cherry picking of sensors used in the study, slight cherry picking of the competitors studies cited I did not spot any obvious red light. The population studied was a set of 4-17 yo children and teens that, according to the additional data (for example 7.6% mean HbA1c) seems to be a bit better controlled than the average population since 75% of that normal population does not meet the 7.5% target. Such a small bias may have had some impact on the study (more on this below) but it is probably because the authors of the study deliver better than average care.

The conclusion of the study were, in short, MARD vs SMBG (capillary) 13.9% in that population (vs a previous 11.4% in a previous adult study) and 99.4% in the AB zone of the CEG. That is in line with the reported accuracy of the Dexcom G4 505 in some studies, although Dexcom likes to focus on its best study exclusively.

The general conclusion was that the device could be trusted, was well accepted and, usual scientific caveat, could be beneficial long term. Well, there is nothing groundbreaking here, we all knew that, didn’t we? The benefit of that study is to be found elsewhere: respected researchers and clinicians, a fair number of cutaneous adverse effects (unlike in some previous studies), a protocol that does not smell of manipulation – that will drive acceptance and adds argument for funding and full coverage.

We do consistently get better accuracy than what the study reported on average. This is probably attributable to the fact that our “bad” weeks were 80% in range, our “good“ weeks were 90% in range while the population studied only stayed 50% in range. Incidentally, as a non T1D, when I ran sensors we had purchased in France on myself, I stayed at an 8% MARD for 12 days before the sensor started to drift. Variability, and the more frequent and usually rapid change of range it implies, definitely affect the CGM accuracy numbers.

The “acceptance” part of the study is very positive for Abbott. Again, we all know that. In fact, despite the overwhelming satisfaction expressed by the participants in the study, I believe the benefits to be understated. I always come back to our tennis experience on that issue: being able to play a full tennis tournament on a single daily SMBG check (as opposed to 10 to 15 checks per match) was just amazing. This was due both on the general accuracy of the device but also on its delay which was, in our carefully documented experience, 9 minutes shorter than the Dexcom G4 delay. For us, the Libre wasn’t merely a well accepted replacement, it changed our experience of T1D for the better.

On the delay side, the authors of the paper note “no delay”. This is really where I want to nitpick a bit. There definitely is a delay (quite visible in RAW data at stable temperature). It is simply partially compensated and partially obfuscated by the behavior of the Abbott’s algorithm.


It is extremely visible in chart B of the paper 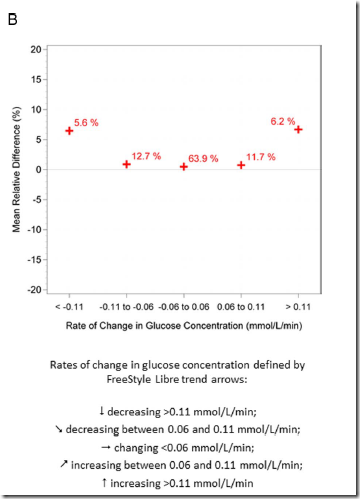 as you can see, the sensor is – on average, note this is MRD not MARD – essentially perfect in stable or near stable conditions. The most significant relative differences occur in dynamic conditions and in the same direction.

In other words, when you are falling quickly, the Libre trails the fall and reads higher (probably missing some hypos), almost as a non delay compensated CGM would do. When you are rising quickly, the Libre leads and overshoots the rise (overestimating some hypers). This is a behavior we noticed immediately (see here, here and here for some of our 2014 reports) and have consistently observed since.


I believe, just as I believed in 2014 that this is mostly the result of the Abbott delay compensation algorithm. It is not necessarily a failure of the algorithm (although looking at the raw data is appears it could be improved) but possibly a conscious decision by Abbott, either based on a technical issue such as an eventual lower signal to noise ratio in low ranges, or based on physiological issues they have identified in the BG to IG dynamics on falls.

I am of course quite happy and a bit proud to have identified the issue in 2014 , while remaining aware our test population was n=2.

One last point on the delay issue is that the authors noted that the granularity of their time measurement was 5 mins. Timing issues are really critical as far as delay computations are concerned, which is why when we tested SMBGs vs Libre we always used immediate spot checks (because that is what matters to the patient) and I had to programmatically resynchronize the clocks on each checks (both the Libre and our BG Meter had drifting internal clocks). I used the same constant resynchronization technique with the Libre vs Dexcom comparison in order to maximize accuracy. Ballpark figures give a 15 minutes delay on the Dexcom G4, with a 9 minutes advantage on the Libre you end up with a six minutes average delay for the Libre vs SMBG (confirmed by our Libre vs SMBG tests in slow rises and slow drops), which would be hard to demonstrate with a 5 minutes granularity, especially if the comparison is not versus spot checks but versus inferred values from the 15 minutes averages.

Last comment: in absolute terms, you should keep in mind that the MARD given in that paper is most probably Libre CGM vs Libre BGM (or other Abbot BGM) and might be a bit biased as the same fundamental decisions have obviously driven the design of both devices. I do like that bias myself as the use of different BG meters would have muddied the algorithmic issue even further and would probably have required a set of Bland Altman plots to debias/detrend the data.

Apologies if I sound obsessed by speed issues, but as far as we are concerned, that was and probably remains (until a full CGM is available one way or another) the defining advantage of the Libre versus the Dexcom G4 or Dexcom G4 505.
Posted by PierreV at 3:40 PM 6 comments: