Real life has interfered – that would probably be a good “psychological burden of chronic disease” post is I was in the mood – and, while the blog hasn’t been updated, it isn’t dead yet.
Here’s a new comparison between the Libre and the Dexcom 505. Unlike one of the previous comparison posted here, this one is utterly “unclean”. In short
In other words, ultra messy real life…

ERRATUM: G4 505 vs Libre - legend copy paste error. Thanks to KS for spotting it. 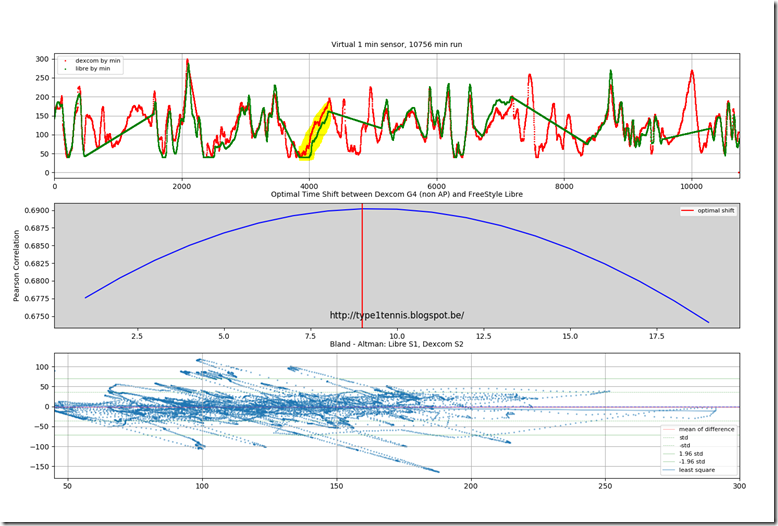 While I would not draw too many conclusions out of such an awful data set, some comments

It is good to have backup. We lost a Dexcom sensor almost at once (not shown here) and the Libre started dangling after a few days. Interestingly, the Libre started to read a bit too low and sensing delay increased a lot. The yellow marker on the above chart marks the near sensor loss moment. When Max noticed (or paid attention), we used a bit of opsite to stabilize the sensor and normal operation resumed.

The Libre remains, in general, faster than the Dexcom 505 algorithm, and even more so if one looks at spot checks (with the draback that those can be off when the trend changes suddenly). We now have a year or so of side by side data and experience and the result is always the same. Yes, on occasions the Dexcom will pick up a trend before the Libre does (as reflected in historical data) but I don’t remember seeing it picking up a trend before Libre spot checks. Depending on the data set, the optimal correlation between the two signals consistently gives a 6 to 10 minutes advantage to the Libre.

Note: I am not really that interested in collecting additional very clean data. In order to make a rigorous comparison, we need to sync the device clocks on a regular basis, we need precise reference points such as “timecode” BG tests, we need mechanically stable sensors, reminders to scan at least once every 8 hours, etc… All of this adds to the management burden of a teen T1D and that is something I don’t really need.

In practice, that speed advantage needs to be taken with some caution:
Still, the Libre remains our favorite sensor for sports.
Excluding the excursions introduced by the interpolation, the Bland Altman plot is relatively flat. Still I wouldn’t draw any conclusion in terms of absolute slopes/biases because the G4 505 depends to a large extent on the calibration it receives (the nasty non linearity of the original G4 has been reduced in the current sensors/algorithm combo).

I realize quite a few issues I addressed here need a more detailed discussion, more data and detailed examples. Please treat this post as a simple keep-alive ping.
Posted by PierreV at 5:47 AM