Reminder: Max is currently wearing both the Libre and a Dexcom G4 (505 algorithm, “Share” US reader). We take advantage of the Libre speed during the day and for sports. We love the trouble free Dexcom remote transmission at night and, of course, the alerts. We are not running any third party add-on for the Libre as I remain unsatisfied with them. I am still not convinced that a reliable, independent and non infringing third party solution can emerge. I simply treat the “Libre Problem” as a hobby I come back to now and then.
The time has come for a few corrections and additional information.

As I said in a previous post, the Libre can potentially use several temperature compensation methods, as described in their patent (1, 2 or 3 points).  To summarize the options
1 point: at least one point (skin) is certain. There’s the huge thermistor sitting in its nice well, and I can interpret its data in relative terms.
2 points: the “skin and board” option, used to estimate the temperature at the sensing site. That option was my favorite for a couple of reasons: other TI FRL processors offer thermistors and I systematically saw two temperature values move as I heated and cooled the sensor. One of those two values was always a bit ahead of the other, which fit nicely with a diffusion gradient. But there is a catch.

3 points: with skin, board and in-situ thermistors. After having looked at microscopic images of the sensing wire, I think that option can be excluded, but as usual can still be wrong.

It is simple and stupid at the same time. Back in 2014-2015, I immediately split the 6 bytes immediate Libre record into 3 words. One for BG, two moving on temperature changes, with some flags. I was aware of the existence of flags, and did not drop them as I masked the observed values. That left me with a temperature value (thermistor value) that I could interpret directly based on experimental correlation and another that I had no choice but to consider as a delta.

On the plus side
On the minus side
Blog reader Robert Gras (r/o/b/e/r/t.gras./3/3at/gmail) pointed out that I would get rid of the 0.7C quantization issue and have a simpler solution by assembling the bytes differently: the well known G value, some flags, the thermistor value, some flags). This feels much cleaner, thank you Robert!

Here’s an example of where I stand right now, with both the immediate values and the historical data. 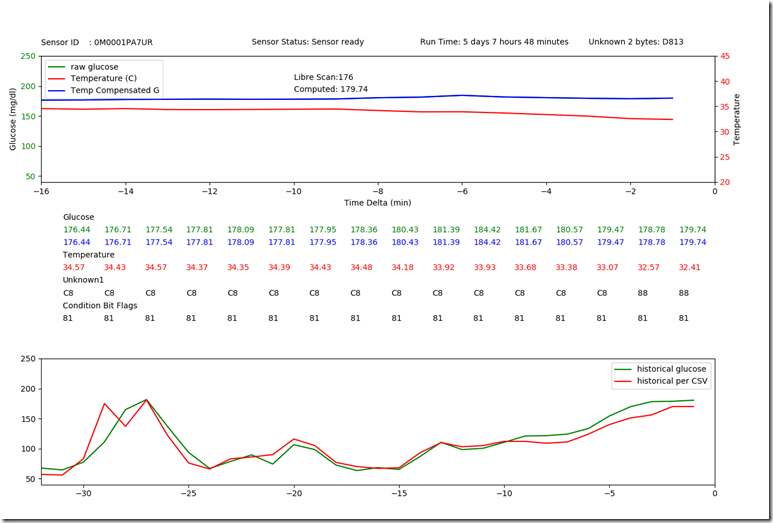 Blog reader R.Z. brought to my attention an additional thermistor that I had missed on the skin temperature sensing circuit. I am told that this type of circuit is a standard, but probably will have to redo my experimental temperature measurements at some point.

In a way, one can say that I lost a thermistor (correction 1, much to my dismay) and that I gained another one….

I’ll keep logging data and situations as I enjoy the hobby.
But, to be honest, I am still depressed when I see open or semi open source solutions, sometimes even commercial add-on products, use a basic approach that I rejected in late 2014 or 2015…
A concerted strategy to make progress (legal progress that is…) would be to collect and document as many situations as possible, too hot, too warm, trending up, trending down, not available, noisy, clean etc… completely. By completely I mean
However, one should keep in mind that the Libre system is actually quite flexible and that Abbott can and has changed things whenever it wants.
Posted by PierreV at 3:21 PM